Brochure About NAAPO and Big Ear

Members
Home » About NAAPO » Brochure About NAAPO and Big Ear
Historical Document
This document is part of the NAAPO historical document collection. Some information may have changed or may no longer apply.
Table of Contents

A consortium dedicated to maintaining and operating the 110-meter radio telescope for the purpose of conducting research, promoting knowledge and furthering education 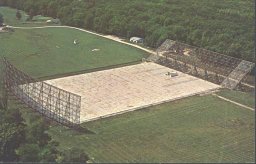 What is a Radio Telescope?

The increasingly popular earth-station dish antennas are good examples of radio telescopes. These dishes are focused on stationary satellites located 23,000 miles above the equator and they are used to tune in to television channels being bounced off the satellite. Astronomical radio telescopes, on the other hand, are used to concentrate and focus radio signals coming from deep space.

A Brief History of the Radio Telescope and Radio Astronomy

Karl G. Jansky, a Bell Telephone radio engineer, is credited with the invention of the first radio telescope in 1930. Jansky built a rotating antenna system to study the effects of thunderstorm interference on telephone communication. Jansky noted that there was a residual interference constantly present even when thunderstorm static was absent. This interference, Jansky observed, came from a direction which moved completely around the compass in a 24 hour period. Jansky concluded that the interference came from deep space well beyond the earth and solar system, perhaps even from the center of the Milky Way.

Despite Jansky's discovery the science of radio astronomy lay dormant, except for the work of radio engineer Grote Reber, until after World War II. In the late 1940's and early 1950's electrical and electronics engineers in the United States, Russia, England, Holland, and Australia began to build radio telescopes, which they used to survey the heaven finding many radio sources in addition to Jansky's initial find.

In time these radio sources were associated with exploded galaxies, rapidly spinning collapsed stars (pulsars), and black hole powered quasars, some of which appeared to be originating on the very edge of our known universe.

The science of radio astronomy had come of age.

Radio telescopes can be divided into two types:

The Continuous Aperture type has antennas which have continuous collecting areas or apertures. Radio telescopes having a single large-dish antenna, like the 76 meter dish at Jodrell Bank in England, are examples of continuous aperture radio telescopes.

The Interferometer type has two or more dish antennas deployed over a distance. Radio telescopes having multiple dishes which produce a multi-lobed pattern, like the multi-dish interferometer at Cambridge, England, are examples of a discontinuous aperture telescope. The world's largest interferometer is the VLA (Very Large Array) in New Mexico.

The NAAPO radio telescope covers an area of nearly 4 acres, which makes it one of the largest in the United States. It was designed to provide the largest possible aperture per dollar invested, producing an instrument that is well suited for deep space search, discovery and mapping.

The NAAPO radio telescope has been designed to provide the maximum possible sky coverage. The declination range of the scope is from 64 degrees north to 36 degrees south. This is 7 degrees south of the galactic center. Big Ear covers a total of 100 degrees in declination which results in an 85% coverage of the observable sky at the observatory's latitude. The scope also has built-in safe guards against man-made interference. This is accomplished through the use of a very low structure profile above the ground.

The unique attributes and merits of the Kraus-type NAAPO radio telescope have been recognized by the construction of Kraus-type telescopes in both France and USSR. One of these in Southern Russia is the world's largest telescope and is used for a wide variety of radio astronomical research including SETI observations.

Why the NAAPO Radio Telescope is One of the Most Versatile U.S. Telescopes

Radio telescopes may be operated in two distinct modes: a scanning mode and a tracking mode. During the scanning mode the antenna beam is is pointed at a fixed point in the sky and scans the sky with the earth's rotation. It is through this mode then that the sky is surveyed and radio sources discovered. After radio sources have been discovered and located, a particular radio object can be brought under more detailed study by moving the telescope beam so that the object is held in the beam for extended periods as it moves across the sky. This may be called the tracking mode in that the object is followed or tracked in its motion.

Although the NAAPO radio telescope has been used primarily in the scanning mode, it is also capable of operating in the tracking mode. The telescope's capabilities are astounding, as it is one of the few which can observe the astronomically fascinating center of our galaxy; and it can not only observe this region but also can "see" many degrees beyond it. The NAAPO radio telescope has strong coverage North to South and East to West with a tracking time of one to two hours.

The NAAPO radio telescope's unique characteristics were utilized in an eight year survey of the sky that covered a larger portion of the entire sky than any other survey. It is also the only radio survey in which complete maps were prepared of all the regions covered. The Ohio survey has proved to be one of the most complete and reliable surveys of the radio sky. It has been important in uncovering many unusual sources from quasars 15 billion light years away to lists of objects with peculiar spectra.

Despite the numerous past accomplishments of the NAAPO radio telescope, it is a strong hope for the future which is most appealing. Future programs should involve development of the tracking mode, program development with the Search for Extra-Terrestrial Intelligence (SETI), Hydrogen and Hydroxyl surveys, galactic plane surveys, and surveys at other frequencies. In any event there is great promise for the future.

Despite moments of uncertainty, the dedication of numerous individuals has brought about an increased interest in the NAAPO radio telescope. A college consortium has been established and four colleges and universities have committed themselves to the project; Otterbein College, Oberlin College, Lafayette College, and Ohio University. NAAPO and these institutions intend to involve both graduate and undergraduate students in their present projects. It is here in the development of human resources that our greatest hope lies.

For those interested in further information about the consortium or joining a growing group of dedicated searchers after Cosmic Awareness, contact: