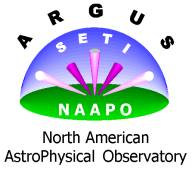 NAAPO, the North American AstroPhysical Observatory, was chartered in 1983 as a non-profit organization originally formed to save, maintain and operate the Ohio State University Radio Observatory's (OSURO) 110-meter "Big Ear" radio telescope, Ohio's only world class radio telescope at the time (and since). This was done by creating a consortium of local colleges and a group of volunteers working together under the NAAPO charter.

The land on which the "Big Ear" radio telescope stood was sold in 1982 to land developers by the Ohio Wesleyan University (an undergraduate liberal arts university located in Delaware, Ohio) which owned the land but had allowed the Ohio State University to construct the "Big Ear" beginning in 1956 and to operate it for nearly 40 years. This sale was done without even the common courtesy of consulting with Dr. John D. Kraus, Director of the Radio Observatory (or anyone else directly associated with OSURO). The land was leased from the developers from 1983 through 1997, which allowed NAAPO to continue to operate "Big Ear". However, the developers would not allow renewal of the lease past 1997. In 1998 the "Big Ear" radio telescope was destroyed by these developers in order to expand an adjacent 9-hole golf course into an 18-hole course and to build some 400 houses on the nearly 300 acres owned by the developers.

Ever since 1973 and prior to its destruction, a group of volunteers operated the "Big Ear" radio telescope, analyzed most of the data collected, and made plans for the next generation radio telescope, which is called Argus. Over the years NAAPO has accepted many tax-deductible donations of money and equipment to support the work of the volunteer group.